Alumina
Aluminium oxide, also called alumina, is the raw material required to produce primary aluminium. It is a white powder produced by the refining of bauxite.

Backwardation
Situation where early periods in a price curve are valued at a premium to later periods. This can be a result of short supply or a peak in demand in the short term.
Basis risk
The risk that the value of a derivatives-based hedge will not move in line with its underlying exposure.
Bauxite
The main raw material for aluminium metal production. Bauxite deposits are mainly found in a wide belt around the equator.
Benchmark (crude)
A crude oil specification that serves as a reference price for buyers and sellers. There are three primary benchmarks, West Texas Intermediate (WTI), Brent Blend, and Dubai Crude.
Benchmark (metals)
A benchmark is a measurement of the price per unit of quantity of the underlying commodity traded in the international marketplace. It is set periodically by the country or through negotiation between the major producer and consumer organisations that consistently sell or buy large quantities of the commodity in a marketplace, and is used to serve as a point of reference against which sectors can be evaluated.
Bid / offer
A market maker quotes a two-way price for a commodity with the bid price lower than the offer price. Customers can sell to the market maker at his bid price and buy from him at his offer price.
Bill of lading (BL)
A document issued by the master of a ship when loading is completed. This acts as receipt for the goods, document of title to the goods and evidence of the contract of carriage. The rightful receiver of the cargo presents the BL to claim it at the discharge port.
Blister copper
An impure form of copper produced in a furnace.
Bunkers
The fuel used by ships. The term for fuelling a ship is bunkering.

Call option
A call option gives its owner the right but not the obligation to buy a specific quantity of a given commodity at a defined price up until a certain point in time, in return for a premium.
Charter party (CP)
A contract to charter a vessel.
Charterer
A company that hires a ship and its crew for a single voyage or for a fixed period.
Collateral
Security pledged in exchange for a loan.
Concentrate
The tradable commodity created by initial processing of lead, zinc or copper ore. Concentrates are used as raw materials by smelters to produce refined metals.
Condensate
An ultralight oil found in huge quantities in shale deposits. When underground it is mostly in gaseous form. It condenses into a liquid when pumped to the surface.
Contango
A market environment where early periods in a price curve are valued at a discount to later periods. It can be the result of over-supply or lack of demand in the present. This is normally a temporary phenomenon.
Copper cathode
A 99 percent pure form of copper - the primary raw material for copper wire and cable.
Counterparty
The opposite party in a contract or financial transaction.

Deadweight tonnage (DWT)
The cargo-carrying capacity of a vessel, in metric tonnes, plus the weight of bunkers, stores, lubes, fresh water, etc. It does not include the weight of the ship.
Demurrage
The compensation paid by charterers to the owners of a vessel for extra time used at the port, beyond what has been granted under the charter.

Exposure
The portion of a trader’s position that is subject to the risk of price movement.

Flat position
Having no outright position - either because nothing is held or because long and short positions net off.
Flat price risk
Exposure to a change in absolute prices in a particular market.
Futures
Contracts for commodities to be delivered in the future. The product, quality, delivery and quantity is specified. These are traded on exchanges and there is no counterparty-based credit risk. The only variable is price. Contracts are marked to market daily.

Geographic spread
The price differential between commodities with the same quality and grade characteristics deliverable on the same date but at different locations.
Giveaways
Refined petroleum products, especially gasoline, that exceed a required specification.

Hedge
A position taken to counteract an exposed position intended to minimise or remove price risk. This is usually achieved using futures contracts and other derivatives.

Initial margin
The per contract financial guarantee required by a clearing house to be able to trade on its exchange.
Incoterms
International commercial terms are trade terms published by the International Chamber of Commerce (ICC). They are commonly used to ease domestic and international trade by helping traders to understand one another.

Laytime
The amount of time in port granted by the owners of the vessel, as stated in the charter party, for the loading and discharging of cargo.
Letter of credit (LC)
A document from a bank guaranteeing that the seller will receive payment in full, as long as certain delivery conditions have been met.
Letter of indemnity (LOI)
A guarantee that losses will not be suffered should certain provisions of a contract not be met. If a BL is not available, then a letter of indemnity is submitted to the owners for the delivery of the goods instead.
London Metals Exchange (LME)
A commodities exchange in London, England that deals with metals futures. Contracts on the exchange include aluminium, copper and zinc. The LME is a non-ferrous exchange, which means that iron and steel are not traded on the exchange.
Long position
The net position of a trader holding / owning a commodity in the market.

Mark-to-market
An accounting mechanism that revalues trading positions against current market prices. Profits and losses are realised at each revaluation.
Middle distillates
The range of refined products situated between lighter fractions, such as gasoline, and heavier products, such as fuel oil. They include jet fuel, kerosene and diesel.
Multimodal
Infrastructure that provides alternative transportation modalities for commodities, e.g. road, rail and river.

Naphtha
A flammable liquid made from distilling petroleum. It is used as a diluent to help move heavy oil through pipelines and as a solvent.

Offtake agreement
A long-term supply agreement where a trader agrees to buy a fixed quantity or proportion of a resource producer’s future output at a specified price.
Optionality
A strategy that may have limited short-term benefits, but confers considerable longer-term value by extending choice and improving contingent outcomes.
Over-the-counter (OTC)
A security or financial transaction conducted away from a formal, centralised exchange.

Posted pricing
A posted price is set by a government or national company where the price is set for a fixed period of time and only reviewed by that pricesetting body.
Premium / discount (metals)
Applied to benchmarks, being the addition or subtraction in price over or under a reference price negotiated between physical trading partners for a specific product, delivery location and date.
Put option
A contract providing the owner with the right but not the obligation to sell a volume of a given commodity at a certain price up until a certain point in time, in return for a premium.

Quality spread
The difference in price between different grades of a commodity deliverable on the same date at the same location. The higher grade commodity will normally trade at a premium.

Reid Vapor Pressure (RVP)
A common measure of the volatility of gasoline. It is defined as the absolute vapor pressure exerted by a liquid at 37.8OC (100 oF) as determined by the test method ASTM-D-323.
Repurchase agreement (REPO)
A contract that operates like a secured loan. The seller of a security simultaneously agrees to repurchase it from the buyer on a specified future date at an agreed price.

Short position
The net position of a trader owing a commodity in the market, often associated with futures markets. They have undertaken to sell a commodity and will need to buy back or cover that position by the delivery date.
Splitter
A restricted refining process that splits condensate into various products, including naphtha and distillates.
Spot price
The current market price at which a commodity is bought or sold for immediate payment and delivery.

THE STEEL INDEX (TSI)
The steel index is a specialist provider of price information for key steel, iron ore, ferrous scrap and coking coal products around the world, based on spot market transaction data.
Time charter
Hiring a vessel for a fixed period. The owner manages the vessel but the charterer specifies journeys, fuel, port charges, etc.
Time spread
The difference in price between a commodity delivered on a particular date and the identical commodity deliverable on a different date. Also known as calendar spread.
Treatment charge (TC) and Refining charge (RC) (concentrates)
TC / RC are amounts designed to cover the cost incurred by the smelter during the smelting and refining process, whereby the treatment costs occur during the smelting process to extract metal from the ore and the refining costs occur during further purification to pure metal where all undesirable by products are removed. They are negotiated fees that may be linked to metal prices as well as market supply and demand, and in the concentrates business usually paid by the seller to the buyer.

Variation margin
Futures contracts are marked-to-market at the end of each trading session. Variation margin refers to the top-up payment required of those holding loss-making positions before the start of each trading session.
Vertical integration
The combination in one company of two or more stages of the supply chain that would normally be operated by separate, specialist firms.
Viscosity
Oil's resistance to flow. Higher viscosity crude oil is much more difficult to pump from the ground, transport and refine.
Volatility (oil)
The speed at which evaporation occurs. More volatile oils have better burning properties, particularly in cold climates, but they also require more active temperature regulation and sealing procedures to protect the environment and minimise oil losses.
Volatility (price)
The degree of variation in a trading price series over time as measured by standard deviation.
Voyage charter
Hiring a vessel for a specific voyage between a load port and a discharge port. The charterer pays the vessel owner on a per-tonne or lump-sum basis. The owner pays port costs, excluding loading and unloading, as well as fuel and crew costs. 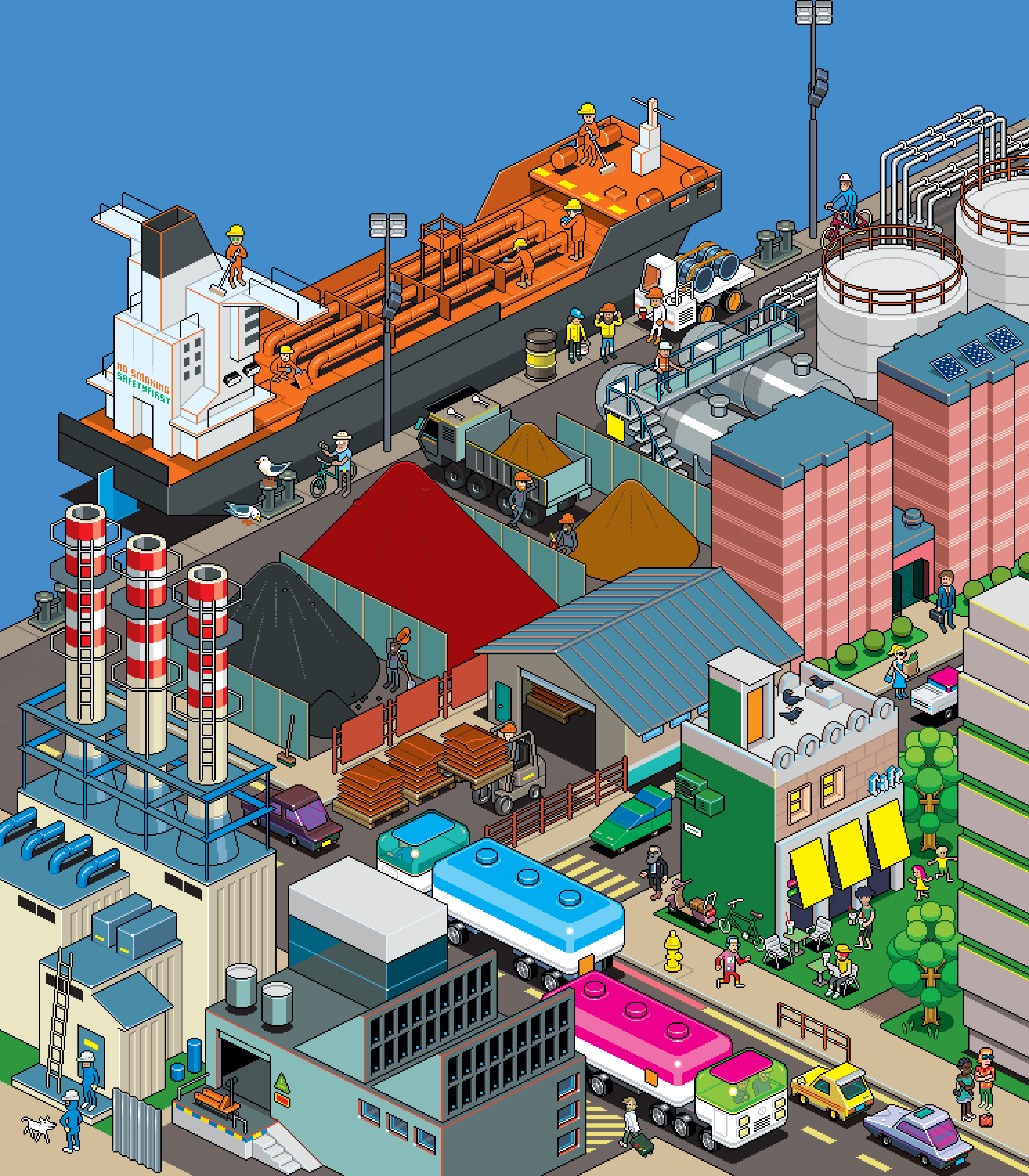